The radio ratings formula is a mystery to many, but it comes down to cume and TSL (Time Spent Listening). Cume is the total number of listeners. TSL is the number of quarter hours listened. Increasing ratings is as simple as driving more of either, or both. A popular strategy for programmers is increasing occasions of engagement. In that regard, Starbucks is more skilled than many program directors.

Of course, Starbucks sells coffee, not listening. And they have customers, not listeners. But the principles of cume (customers) and TSL (occasions) are exactly the same. Starbucks understands the concept and they use it to drive increased usage and profits. Programmers can learn from this.

Programmers know the key to listening growth is to create an appointment tune-in occasion. The more occasions, the higher the ratings. It’s also widely understood that repeat listening behavior creates new habits, and that turns into consistent, sustainable ratings performance.

Yet it remains a challenge to create programming that inspires passion or a sense of urgency. Radio is a background companion to most listeners, always there when convenient. Just as Starbucks is on every corner and grocery store.

So, like Starbucks, radio needs to create reasons to use the product with an Urgent Call to Action (CTA). And that’s what Starbucks does to recycle their “audience” and drive visits to stores.

In marketing, brands create urgency by making products available for short periods of time. This creates the illusion of a shortage. Airlines do this on websites with messages to “Hurry, only 2 tickets remain at this price”. Increase the urgency with FOMO (fear of missing out) is intended to persuade a shopper to click “buy” before it’s too late.

Starbucks’ marketing has brilliantly leveraged a loyal fan base over the years. They deliver consistency in products, regularly surprise customers with new drinks, and offer incentives through their loyalty program.

But how can a brand grow when they’ve reached most of the potential audience? By increasing occasions and creating new habits for using their product.

One tactic is a recurring and very popular promotion. Treat Receipt adds urgency by recycling the most loyal coffee drinkers (morning users) to a lower-traffic time period.

Customers who purchase a coffee in the morning can bring the receipt after 2 pm for a significant discount.

That last point is the important one. Convincing customers to return regularly during the promotion conditions to a new usage pattern. This could turn into long-term, sustainable growth, even when the incentive passes.

But the promotion isn’t a permanent feature. It happens over several weeks (long enough for consumers to start a habit), and returns 2-3 times a year.

The key to success is that the promotion is available regularly, but not always. Each time it returns, there’s a sense of urgency and excitement.

McDonald’s uses this tactic with the McRib. Does anyone really like that sandwich? Apparently, because each time it returns, an inexplicable frenzy drives sales. There’s even a McRib locator on McDonald’s website showing where the sandwich is available at any given time. It would likely be a slow seller if it part of the regular menu. It may even be eliminated. McDonald’s makes it scarce and promotes it aggressively. And the audience responds.

The point is that promotion or offers with limited engagement almost always performs better than one with no deadline. Implied scarcity makes it seem more important.

We lock-in features, games, contests, and promotions, but tend to set it and forget it. We often fail to inject it with enthusiasm and excitement.

Consistency is good. But too much of the same leads to apathy. The creative challenge is to add urgency and excitement to the daily programming mix.

That goes for programming features, promotions, and personality segments.

Starbucks does this each fall. They create urgency when the Pumpkin Spice Latte is released.

Broadcasters should constantly challenge their creative team to turn routine to urgent, with the goal of adding “can’t miss it” tune in moments.

Here are three ways to start:

For example, if you play a game like Heads Up as a regular feature, offer a special one-week limited-time themed series. Theme it

by topic or attracting contestants from a specific career field (Nurse’s Week or Teacher’s Week at Back to School time).

Stations with a Hometown Heroes feature could make September First Responders Month, as a nod to 9/11.

This also works with special programming. Don’t just sprinkling in “oh wow” songs from the library.  Showcase library depth with a special weekend. If 90s hip hop songs are a small part of the station’s music mix, why not turn that genre into a special weekend feature? This is even more effective over a 3-day weekend.

Promote it heavily and focusing all programming on the special event the way Starbucks celebrates Pumpkin Spice Latte. A highly promoted weekend will produce more attention, image points, and TSL than playing a couple of songs an hour in regular rotation.

There’s a lot to be said for consistency, but sometimes absence can add excitement when a feature returns for a limited engagement.

Many stations use commercial-free music sweeps as part of regular programming. Usually, it happens at the same time each day. And once it’s launched, stations tend to do it forever. Soon it becomes part of the background. Just another item on the menu.

Why not bring back longer commercial-free music segments (more listening value) in shorter flights (urgency) and promote it aggressively (celebrate it)? Back it up with a contest or game to shine even more attention on the commercial-free hour(s). When the campaign ends, return to normal programming.

For personalities, most listeners won’t miss a minor feature that’s resting, as long as it’s replaced by something compelling. Customers don’t realize Starbucks’ treat receipt program has expired because they simply stop promoting it. Do the same with some games and minor features.

When a minor feature rests, introduce a new element, and promote it aggressively. When the resting feature returns, re-introduce it with the same excitement.

Caution: Don’t rest your most valuable features. McDonald’s would never take the Quarter-Pounder off their menu.

An often overlooked way to create new excitement is through production and imaging.

Even if the content is fresh, it can sound stale when the presentation has become routine or predictable. Add a twist with new themed production elements that jump out of the speakers.

For example, a promotion like Beat The Bank is a terrific contest. It works over and over. But instead of launching the campaign using every bullet in the promotional weapon, save ideas for future campaigns. It might start out as the $1,000 Beat The Bank. The next time it comes back, raise the stakes to $5,000. Then $10,000. Then $50,000.

Or borrow from Starbucks’ loyalty strategy. Instead of playing a game at the same time each day, add a special version of the contest with a bonus offer at a less listened-to time. That could leverage strength and create urgency at a time that needs a boost.

Pay attention to how brands like Starbucks add urgency to their products through new features and promotions. There are dozens of limited time only promotions designed to increase visits or encourage sampling of new products.

Then organize a product marketing meeting to find ways to keep your brand fresh, interesting, and urgent.

This demands attention, creativity, and time. What are you doing today that’s new, exciting, or fresh?

There Are Only 3 Ways To Increase Radio Ratings 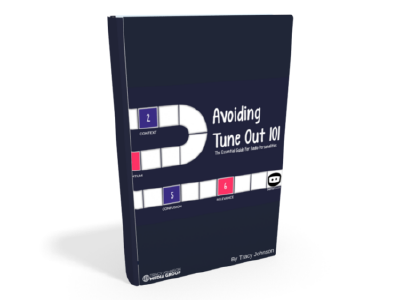