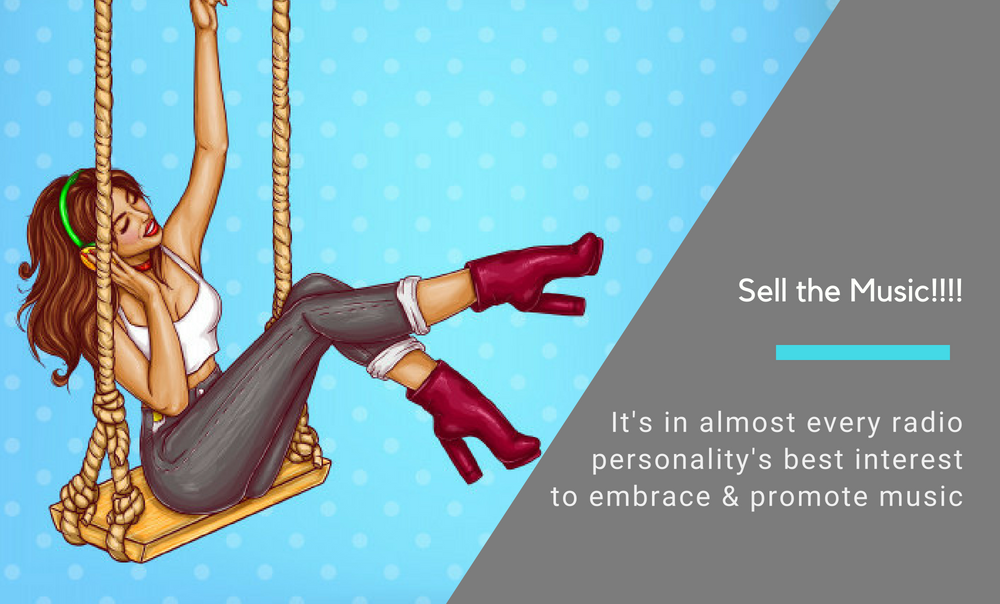 But it’s become a rarity in radio.

Now, I’m the first to claim that stations built exclusively on music are on a collision course with oblivion. Consumers have so many choices for consuming music without commercials or interruptions. Broadcasters must develop personalities to remain relevant.

Still, it’s a mystery why personalities and even some program directors place little value on enhancing a music brand through personality.

Programmers and music directors spend hours and hours agonizing over music decisions with the goal of crafting the ultimate music flow that will optimize time spent listening and station branding.

Then, air talent treats music as an after-thought. And I’m not just talking about dropping or moving songs. At more and more stations, personalities ignore the music. It’s almost like songs are commercials taking up space between the times they get to talk.

And it’s not their fault. I’ve heard many programmers tell air talent not to promote the songs or artists because “our audience already knows those songs.”

First, they don’t. Not nearly as much as you think. Even the big hits in power rotation are unfamiliar to many listeners.

Second, if they do know the songs, embracing the music is an opportunity to send a marketing and positioning message that defines your radio brand.

Music is a path to connecting with the audience.

Here’s the thing: On music stations, listeners come for the music first. They want to be put in a good mood, use the station as a soundtrack, or hear a favorite hit. So doesn’t it make sense that the fastest way to become a popular personality is demonstrating that you love the same thing the audience loves? It’s common sense.

Listen to great radio personalities like Broadway Bill Lee or Casey Kasem. These legendary personalities leverage the power of the music as an entry point to become friends with listeners.

That’s why it’s so disappointing when personalities fail to connect through the songs. It’s a missed opportunity to make the station sound better and become more popular.

Great personalities promoting music increases the popularity of the station and the daypart. And, it creates a bigger platform on which to demonstrate personality.

Personalities NEED the station, and the station NEEDS personalities. Promoting the songs (and other elements) should be baked into the DNA of every radio personality on a music station.

If you’re not embracing the music and making it important, the music isn’t that important.

And if that’s the case, drop some songs and turn up the personality. A more music radio show will not hold up in the future, anyway.

But for now, if music is on the air, make it important!

Personalities promoting music is a wonderful thing when talent takes it seriously and sees it as a benefit to listeners and their career.

Mastering this skill is part of what I call ize-ing personality content. There are four “izes”: Personalize, energize, localize and commercialize. Embracing the music is part of energizing content, and it’s one of the easiest things to execute. By the way, here’s a great show prep hack that will streamline the process.

Then, make it exciting, creative, and important by reviewing and reinforcing the importance during brainstorming and coaching sessions.

It’s easy to take for granted, but if music makes up a large percentage of the entertainment value, doesn’t it make sense to do a better job connecting to it?

How To Prepare a Radio Show

Radio Personalities Should Be The Face Of Your Brand

5 Tips To Be More Likable On The Air

Here’s Why You Must Develop Personality Now