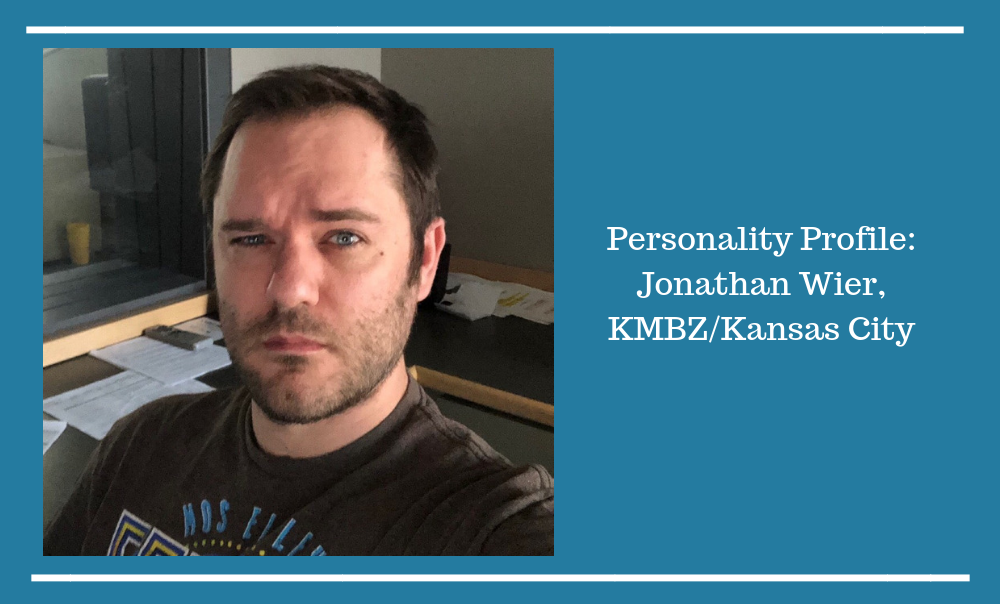 The email landed in my inbox from Jonathan Wier. In short, he said,

For the first time ever my show (The Jonathan Wier Show 6-9pm on KMBZ in KC) is #1 in every single demo. This is an amazing turn around from where we were a year and a half ago when we were lucky to break into the top ten.

KMBZ is a news talk station. To win in an early evening time slot in that format is an incredible accomplishment, regardless of market size or the competitive landscape. But consider how Jonathan did it, and the story gets even better. It’s unconventional. And that’s what makes it special.

Jonathan’s talk show from 6-9 pm is #1 in every demographic. Let that sink in. When’s the last time you heard of that on any station in any format? Then consider that this is a talk station in a large market. Wow.

Typically, talk performs poorly in the evening. That’s one reason so many talk stations programs syndicated content at night. Local hosts, especially with cohosts, producers, and news personnel are expensive.

Furthermore, traditional programming wisdom on music stations is to reduce personality content as night comes around. Those stations become a music machine, pumping out hit after hit, with limited personality breaks.

This show breaks the mold, wins the time slot, and could be the beginning of a trend that will define the radio industry’s future: Personality!

Prior to November 2017, Wier’s ratings were insanely volatile. They typically ranked as high as #4 to as low as 14th. That’s a symptom of a show that has potential but hasn’t yet built a base.

There were contributing factors to the wild swings. For one thing, KMBZ often aired local college basketball, which meant Wier’s show was pre-empted a couple of times a week during the season. It’s hard to build daily cume when the audience doesn’t know what will be on. Getting rid of the basketball broadcasts allowed the show to build momentum.

At the same time, the station invested in a local news personality, adding Wier’s cohost Rebecca to the mix. Soon, the show started to grow. They rose from 11th to 7th, then 4th.  And in the last quarter of 2018, the show was #3 in every demo.

Then, in January 2019, they reached an all-time high at #2. In March, they are #1. It’s a great rating pattern. Consistent growth like that is not a fluke. And it suggests the gains are sustainable.

How did he do it?

Jonathan Wier applied many of the concepts you’ve read and heard here, in my monthly webinars and in more depth at Insiders Radio Network.

The first principle Jonathan applied is to promote exactly when to tune in for the next segment. Wier applied the fundamentals of effective teasing and pre-selling, proving that the fastest way to increase ratings is getting existing listeners to tune in more as explained in this Seminar on Demand. His cohost calls this “Love the One You’re With”.

Almost all of our commercial breaks are just 5 minutes long, so asking listeners to stay through the commercials is easy. This honestly seems to have had the biggest impact for us. When we did this, our ratings became more consistent and we didn’t yo-yo as much.

They also added an imaging sounder as a transition from content to the tease. A sonic identifier separates topics, frames the tease, and allows it to stand out more prominently.

Wier also worked on building each segment by applying solid storytelling techniques, paying particular attention to the payoff. He concentrated mostly on getting out of the break on a high note with a joke and a laugh.

KMBZ is a talk station, so one would expect a show on this type of station in the heartland of America to talk about politics, but that’s not what the show is about. They leave political ranting and raving to others.

Jonathan Wier will talk about local politics, but never about the divisive stuff happening in Washington. Wier explains that’s just not what he is about:

To me, and it could just be our market, talking about Trump is as bad as talking about abortion. We can’t reason with people. We can only get listeners to call each other names. The result is we end up alienating everyone. The most significant thing I do on air is tell stories. We found that when we talked about the Russia Collusion or Stormy Daniels, we were yelling opinions at each other. I hate that kind of radio, so we stopped doing it.

Instead, the show is more what you’d expect from a Hot AC or CHR morning show, without the music. And it’s working because he makes you laugh, smile and play along!

He describes what the show is all about:

I like to think of that scene in Reservoir Dogs by Quintin Tarantino where the undercover cop is supposed to tell a story to convince the gangsters that he is also a gangster. They give him a script, and they show him progressively memorizing details, and making the story his own until he tells it in a way that is believable and relatable. That’s pretty much what I’m doing. Taking a weird/funny/sad story that I read and then owning it.

When the storyteller owns the story, cohost roles fall into place, allowing the show to make funny observations as an ensemble.

Wier’s cohosts do a great job of helping him tell a story by asking questions, as you can hear in this audio:

They obviously went on to do a lot more with this story. Wier says:

I owe this to Tracy Johnson’s Topic Tree seminar. I talked about how I refuse to go to cemeteries other than for funerals because they are creepy. We talked about how burials are outdated and should be done away with. Eventually, we got stories from the audience about what was the BEST thing that happened to them at a cemetery. That’s something I like to do with topics. I think of an obvious question, then ask the opposite to get a more interesting response.

Finally, Jonathan discovered the power of The One Thing. This is a primary rating driver for radio shows, and it works nearly every time. Wier started building sticky features to keep listeners coming back for specific things at specific times. For example, his Friday night feature really took off. It’s a bracket-style game, and listeners can participate.

Our One Thing that really took off is called The Friday List. It’s not a list per-se where we just list someone else’s ranking of something. We pick a topic like Best Song To Relax To and then each of us puts our picks in until we have 16. We pair them off and vote until there is one winner. We often get more than 5000 texts for list suggestions alone.

Create memorable features in an easy to understand package and insert storytelling skills, and you have the recipe for a #1 show. Content wins. Personality wins.

Jonathan Wier has been a member of my Insiders Radio Network for some time, and I couldn’t be more proud of his amazing success. He flattered me when filling me in on his success:

There have been some major changes that have helped the show along the way, but the biggest change was a year and a half ago is when I signed up to your website and started using some of your techniques. It’s amazing how much better I understand PPM and teasing and general show momentum now thanks to you. I just wanted to reach out and thank you for all the tips, the $20 I pay a month is WELL worth it.

You can try Insiders for 14 days for just $1, and choose the membership plan that works for you. Get details and sign up here.

Congratulations, Jonathan. What a great story. I’m proud to be a small part of it.

Art of the Tease Seminar on Demand

The Power of The One Thing