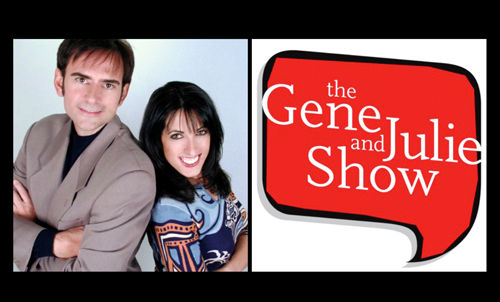 This post is written by my friends Gene & Julie Gates, stars of the Gene & Julie Show, which aired for nearly 8 years on KVIL/Dallas. They were the first show in 13 years to return the station to it’s #1 position with 25-54 women. Shortly after, Gene & Julie opened Battuto Italian Kitchen, which was voted “Best Italian” Restaurant” on TheDallas A-List). While operating their business, they discovered that running a restaurant was going to make them a better morning show. I asked them to share it with you.

When we decided to invest in a restaurant we had no idea how much we were investing in our broadcasting future. As it turns out, we learned a lot about doing a successful morning show from running Battuto.

One of the most profound lessons came during a weekly manager’s meeting, the chef served his special for the night: butternut squash ravioli with brown butter sage sauce. He was very proud of the dish and expected we would love it, too. He set the plate in the middle of the table. It looked disgusting.

There were five nice-looking ravioli on the plate, but they were swimming in a pool of rancid butter. It looked gross. But worse than that: it tasted just as bad – or worse. We looked for the reaction from our managers, and as our eyes locked it became apparent. It was awful. We all hated his masterpiece.

This was a defining moment. How do you tell your star that their content sucks, but still let them know you love them and believe in them? For the first time in our career, we were sitting in our PD’s chair was when he or she had to tell us that our bit bombed. As management, we had a different perspective. We knew this dish wasn’t going to work.

So Julie and I worked the dining room every night while the chef was consumed with cooking, creating specials, ordering and receiving food, scheduling staff and running his “show.”  We were immersed in market research, with our own personal mini focus groups. We talked to guests about their experiences, stayed in touch with our servers and monitoring reports to see what was selling and what was burning out. The chef can’t possibly be expected to have the same point of view.

It was up to us to communicate this “real world” to him.

Our Chef, The Air Personality

It was in that moment that we realized our chef was just like a morning show. His daily specials were his content. He was proud of it. As managers, we had to decide how to handle this sensitive talent. Now we liked our chef a lot; he earned rave reviews from local critics and was honored to cook at the James Beard House in New York City.

But this dish sucked, and we had to tell him. The great talent are creative bundles of insecurity.  Even the legendary Kidd Kraddick was filled with feelings of inadequacy. When we worked with him (cluster mates), he owned the market and had one of the best jobs in America, working for one of the greatest bosses ever. But even in this safe place, Kidd told us he felt his show sucked and he was just one bad show from being fired.

When we bring our show back to the air following our one-year sabbatical, we now have a deeper perspective. Having been on the other side, we realize that management and consultants share the same goals, and while we’re slaving away cooking content in our studio “kitchen”, they have input that can make our offerings more delicious.

We will listen, be objective and try not to take it personally. Then we’ll go out for a great meal, feeling for that poor bastard slaving in the kitchen. And we’ll go out of our way to send a compliment to the chef about how good the meal is… unless it sucks, then we’ll blow his ass up on Yelp. 🙂

Gene & Julie are actively pursuing for their next radio gig. I recommend them, and invite you to check out their show here.

The Secret To Creating Winning Personality Radio and Food?