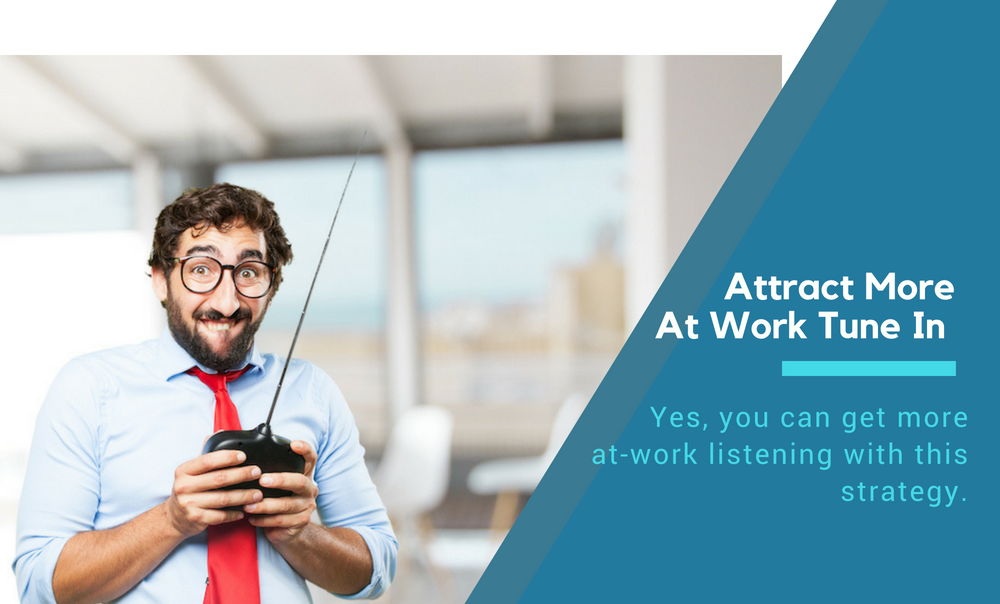 Programmers constantly try to find the Holy Grail for ratings growth. Most focus on occasions of listening, which is a valid concept, but isn’t really a strategy. Still, it’s proven that attracting existing listeners to tune in more often is a successful approach, especially with declines in listening at home and at work.

But the greatest leverage for TSL growth is the question. Find the solution to becoming the listener’s choice for listening in the workplace and it could unlock massive quarter hours. The reasons are simple, really. With listening levels far lower you might expect, it doesn’t take very many meters locked on your station or diary entries crediting your station to turn into large ratings advances.

This is why so much money is invested in at-work listening promotions, contests and marketing campaigns.

But it’s becoming more and more difficult to win at-work listening. Even if share goes up, overall quarter hours are under pressure. Technology has introduced new challenges to stations trying to hang onto their position for at work listening.

Satellite radio offers dozens of commercial free music services in all genres. Streaming services from Spotify, Apple Music and Amazon offer inexpensive options that can be customized. And as bandwidth continues to increase, accessing hundreds of thousands of streaming solutions is easier than ever. Just a click or two, or a voice command to Alexa unlocks a world of endless possibilities.

So while the reward for being the listener’s at-work choice remains high, it becomes more and more difficult.

Many stations have responded by trying to compete with the strengths of new competitors. Typical tactics include locking in  commercial free music hours, usually launching the workday with (your dial position here) minute commercial free. Yet, promoting commercial-free doesn’t have nearly the appeal it once did. Even 100 minutes commercial free on the radio pales compared to always commercial free.

Another popular choice is ending the morning show earlier. I’ve always believed scheduling air personalities based on the ratings service dayparts makes no sense. But more stations are launching mostly music programming earlier and earlier. They conclude that the only way to compete with commercial free services is to become as much like them as possible.

But that never works. It’s impossible to compete with a product by becoming more like them.

How to Win At Work Listening

Here’s how program a station to win at-work listening.

Not just becoming a P1 station, but becoming a true favorite station of as many listeners as possible. Increase the percentage of loyal fans that love what you do and who you are. In other words, be a great station listeners want to take everywhere they go.

And that doesn’t happen just by trying to out-music a music specialist. It comes by inspiring passion.

That usually comes from building a station personality rooted in magnetic on-air personalities. Great personalities are a lightning rod that attracts listening far beyond just the appeal of the collection of songs played.

A Great At Work Station

Music. They playing the right music. But at-work winners don’t come from finding the perfect music format. It can be any style or texture of music. It could be Soft AC or Classic Rock. The key is turning listeners into fans of your brand, whatever the music genre.

Packaging. The music format must be supported with terrific positioning and imaging that enhance the desired mood. The stations are put together so the whole is greater than the individual parts.

Promotion. To win any position, promotion and marketing are critical. At-work winners usually are aggressive with marketing and promotion that advance their premise.

Contests. There’s no doubt that adding an incentive can increase at-work listening. NuVooDoo’s study shows that incentives work, and those contests should be early in the workday:

But there’s one more essential quality that sets winning at-work stations apart. They have relatable personalities that cause listeners to become fans.

The unbeatable at-work combination is advanced with high profile air personalities, especially in the morning.

When those personalities become primary spokespeople for everything on the station, with a significant presence around the clock, stations can become nearly bullet-proof.

The key to being a great at work station is having an attraction that attracts a large cume. Then leverage that asset to lead listeners to using the station for other purposes. Great personalities build listening when they’re on the air, and when they’re not. They convert fans, and stations with a large fan base naturally perform better in at work listening.

Many programmers seem to downplay the importance of great personality. Some even hide them, almost as if morning shows and at-work listening can’t co-exist.

Stop hiding high profile personalities. It’s fine to make adjustments to programming based on the time of day. But why reduce or eliminate some of the best and most unique characteristics of the radio station? That’s what will help you stand out against all other competitors.

By all means, build the at work strategy with . the right songs, promotions, contesting and more. But start with building personalities. Become their favorite station and they’ll take you to work with them.

Your Real Competition Is Not Other Radio Stations

You Won’t Believe How Little The Audience Actually Hears

Why You Should Focus More On Winning Fans